WHo we areWHAT WE DOGET INVOLVEDDonate

Let's Get Back To Work

We outfit individuals experiencing homelessness or housing instability
with the required work items needed to start a new job.

Get InvolvedGet Assistance
The Issue

Accepting a new job is nearly impossible for someone who doesn't have the required work items needed to show up on their first day.

Finding employment while experiencing homelessness is stressful to say the least. On the first day of work, new employees are expected to show up on time and outfitted in the required uniform, wearing proper footwear and with tools or other required work items in hand.

We help remove obstacles that often prevent workers experiencing homelessness from being able to take a new job. By providing work clothes, work shoes, tools and a bus pass, our clients feel prepared and equipped for their new position. We believe gainful employment is a key factor in helping individuals get out of their homeless situation.

Clients are confident when they show up on the first day of work outfitted in work-wear and work shoes that are appropriate and required for their new jobs.

Tools For The Job

Tools for trade professions are often mandatory in these fields; without them skilled workers like barbers, construction workers and cooks cannot get back into higher paying jobs.

Dependable transportation is critical for maintaining employment. By providing a monthly bus pass, clients have a reliable way to get to work.

We help cover test and license fees so that clients can return to work in the higher-paying fields in which they have been trained. 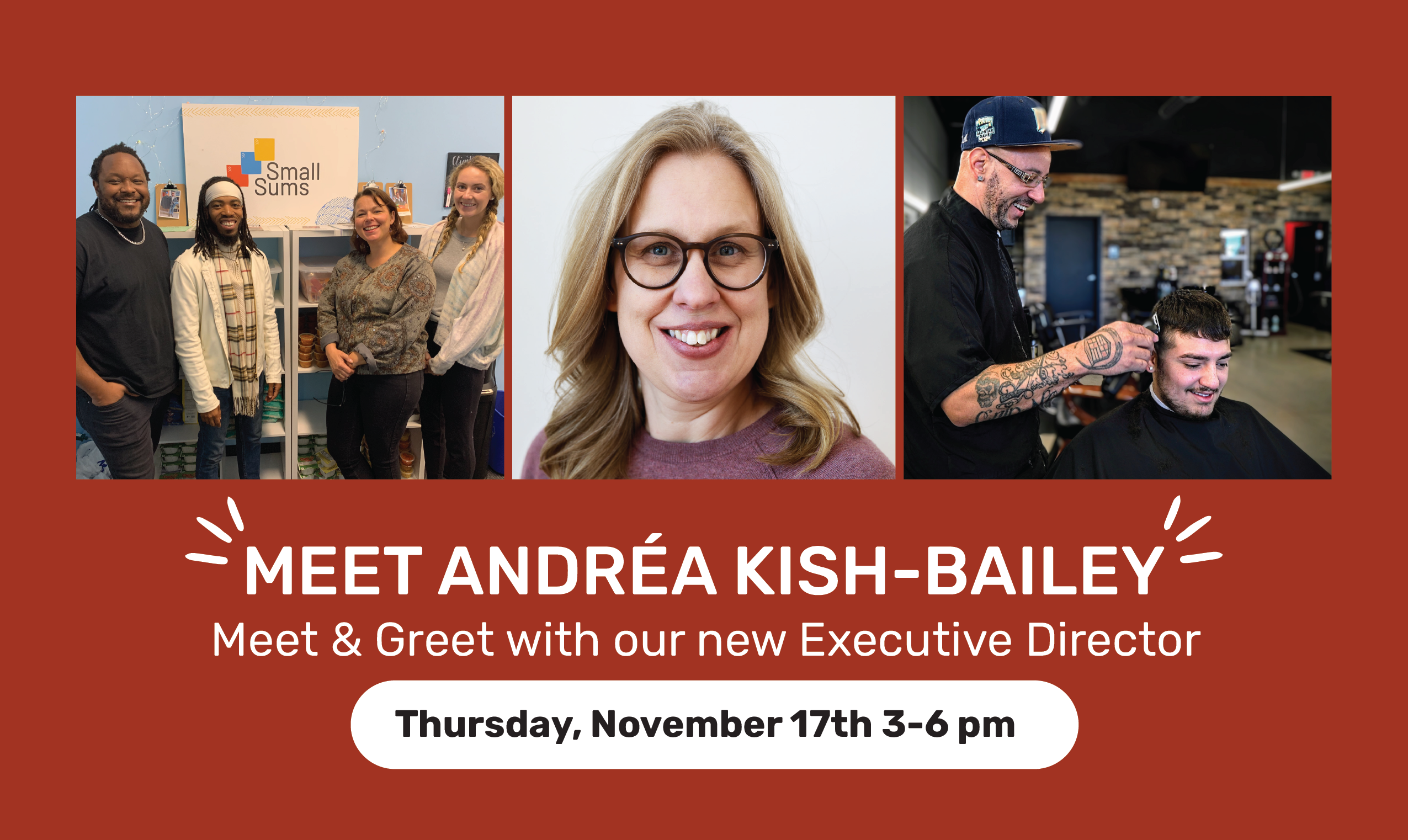 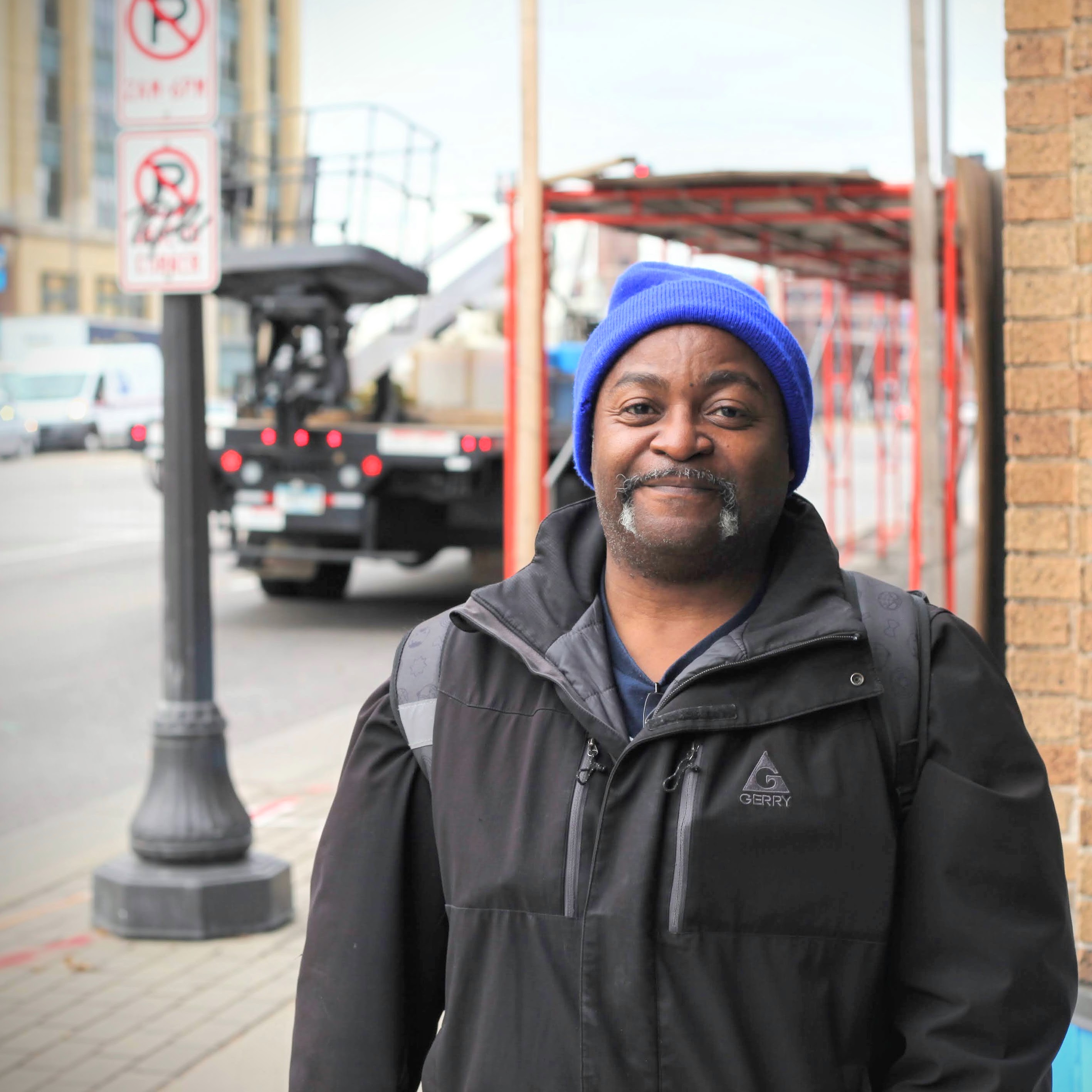 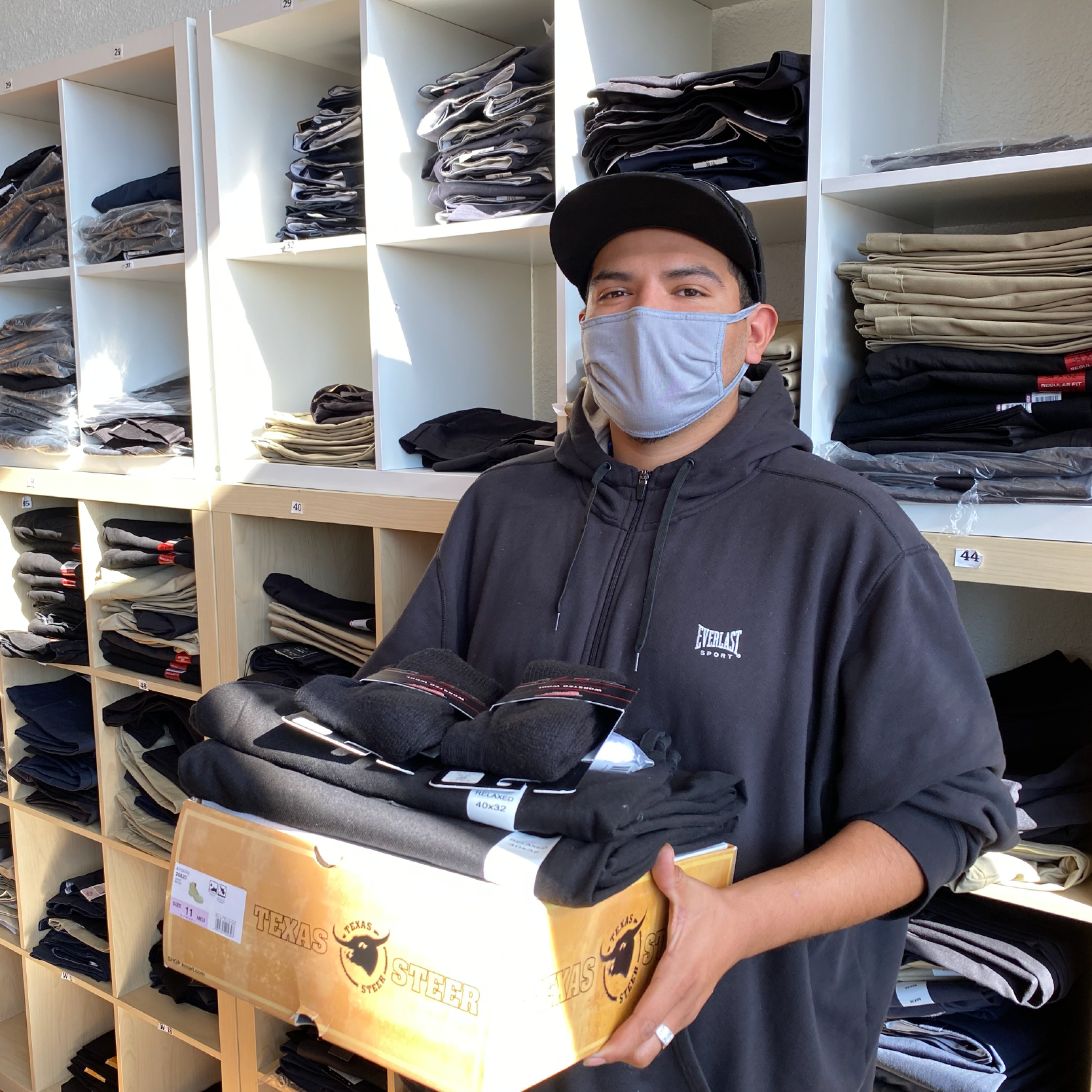 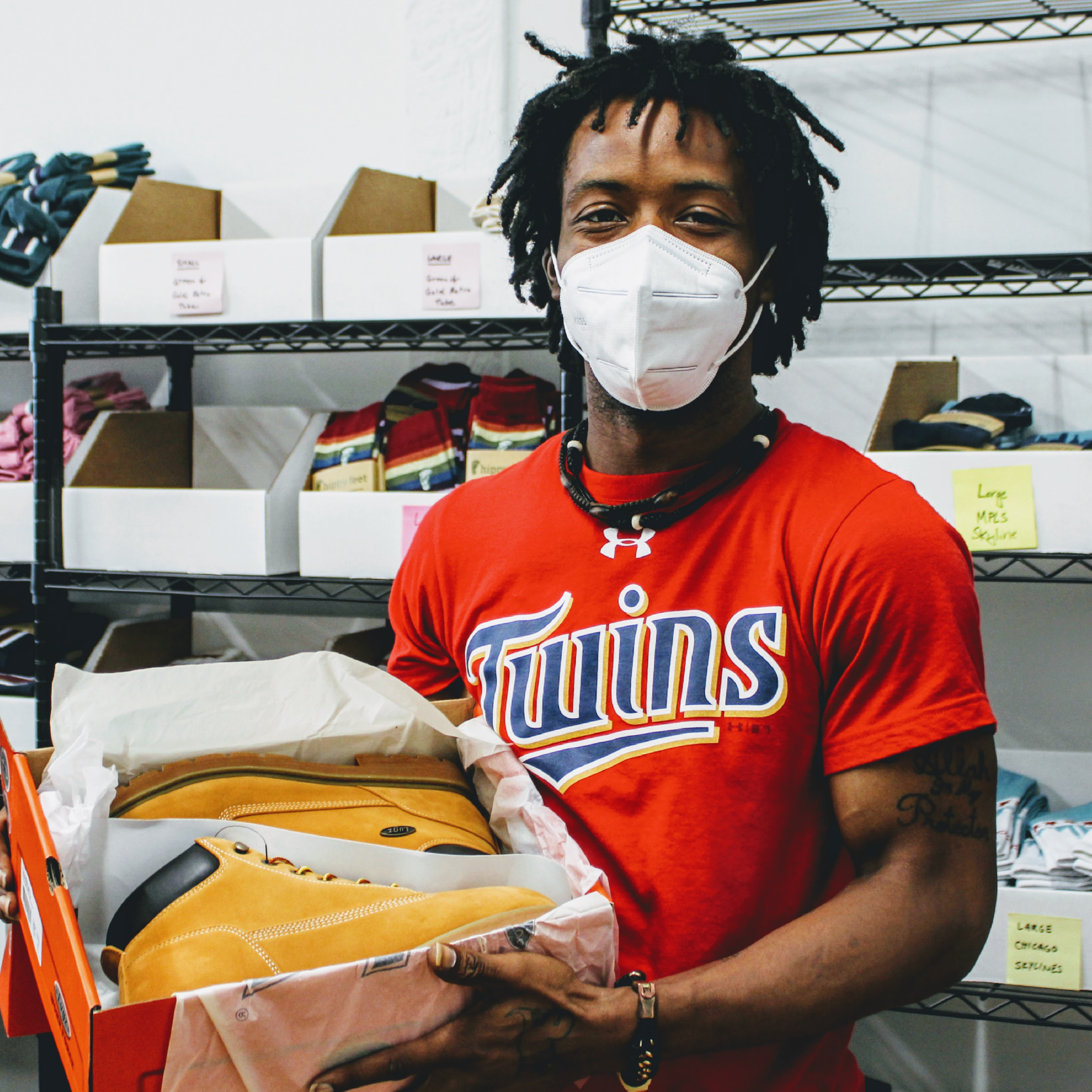 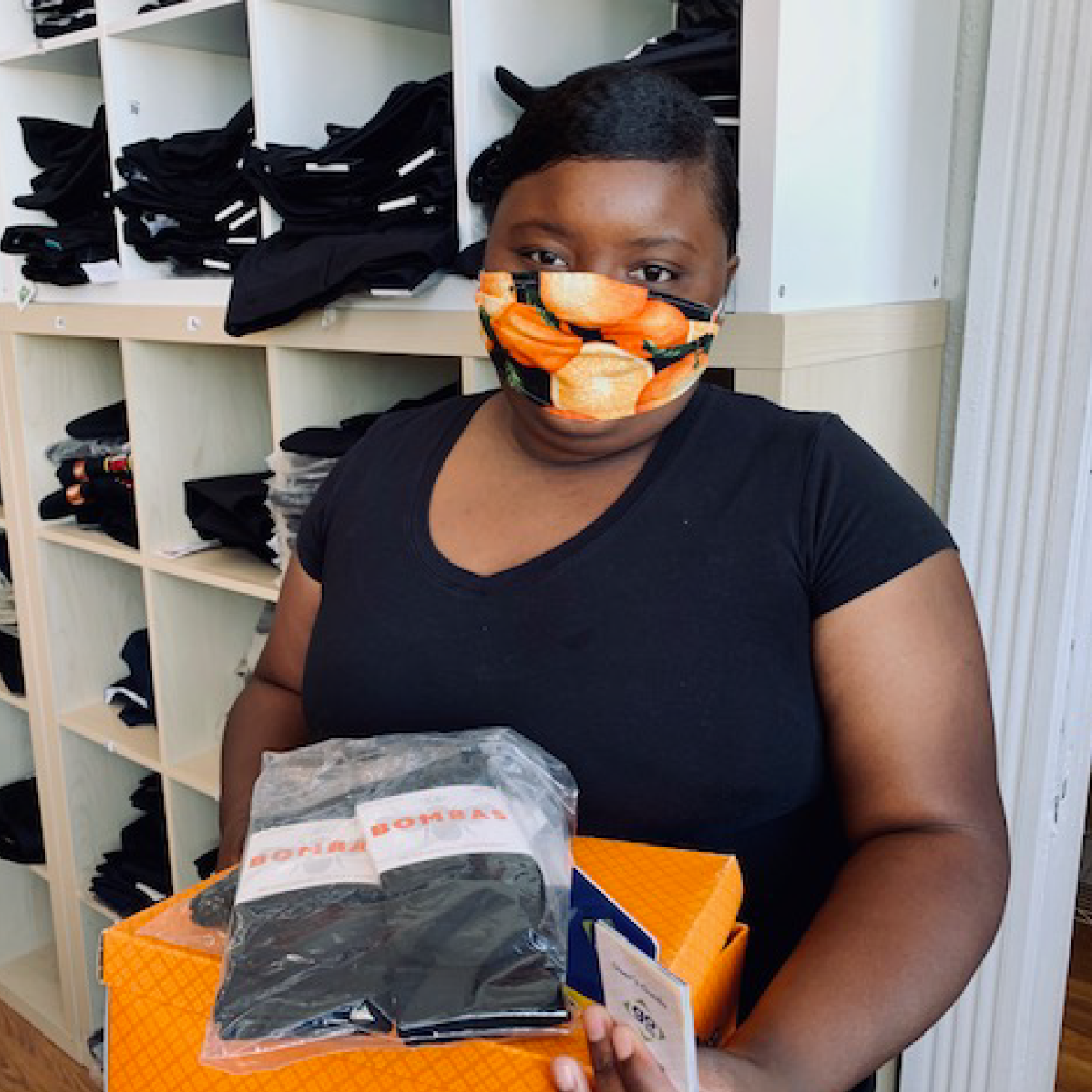 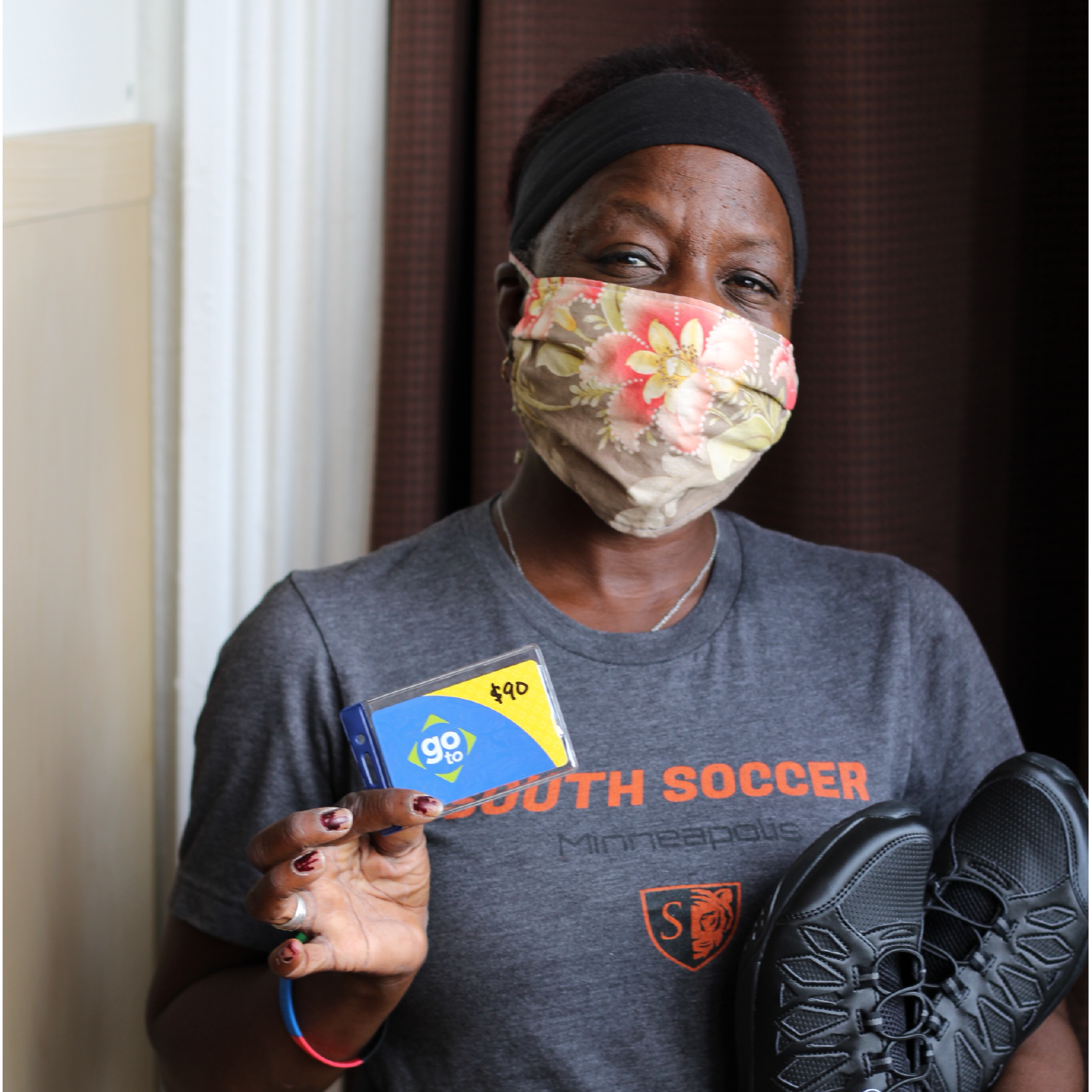 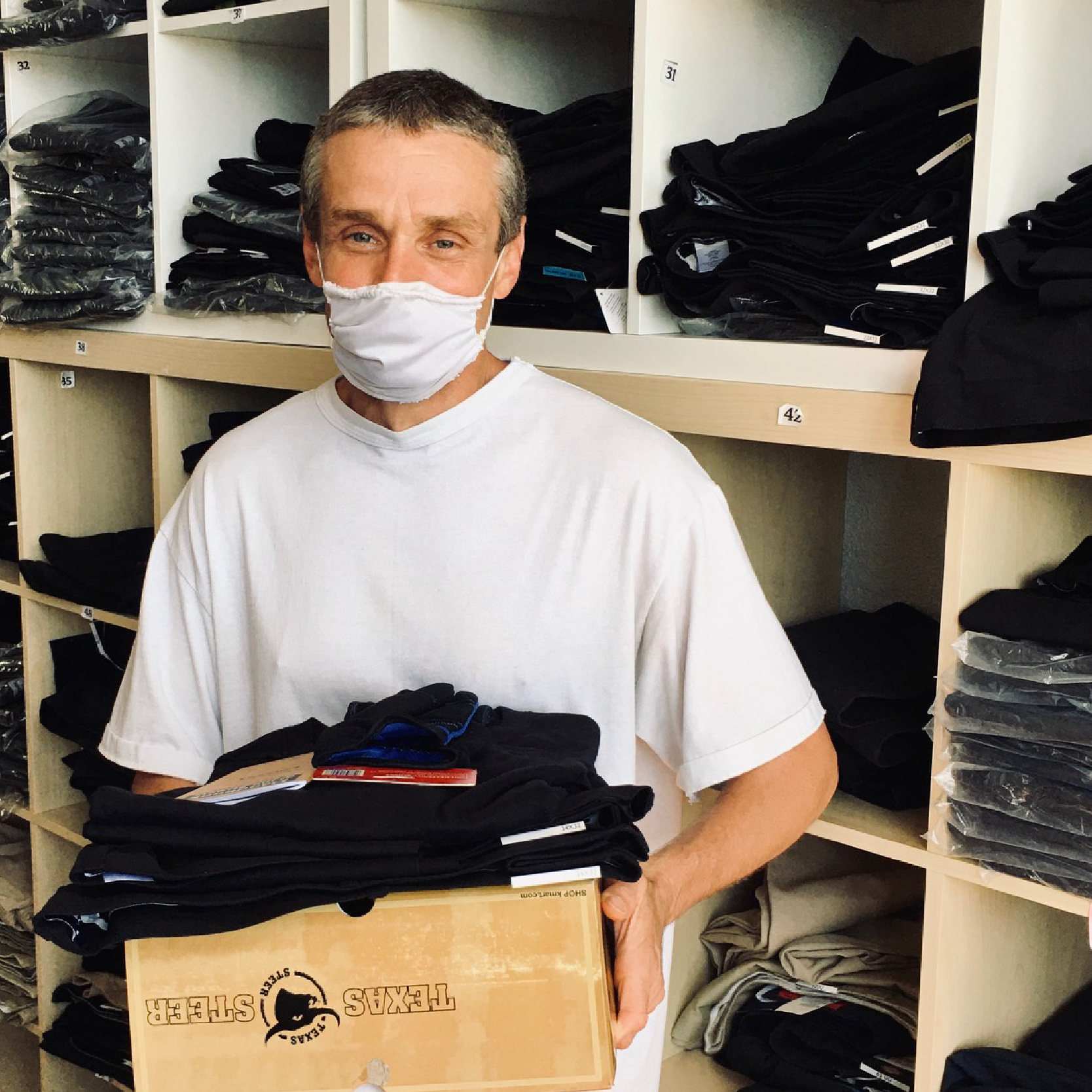 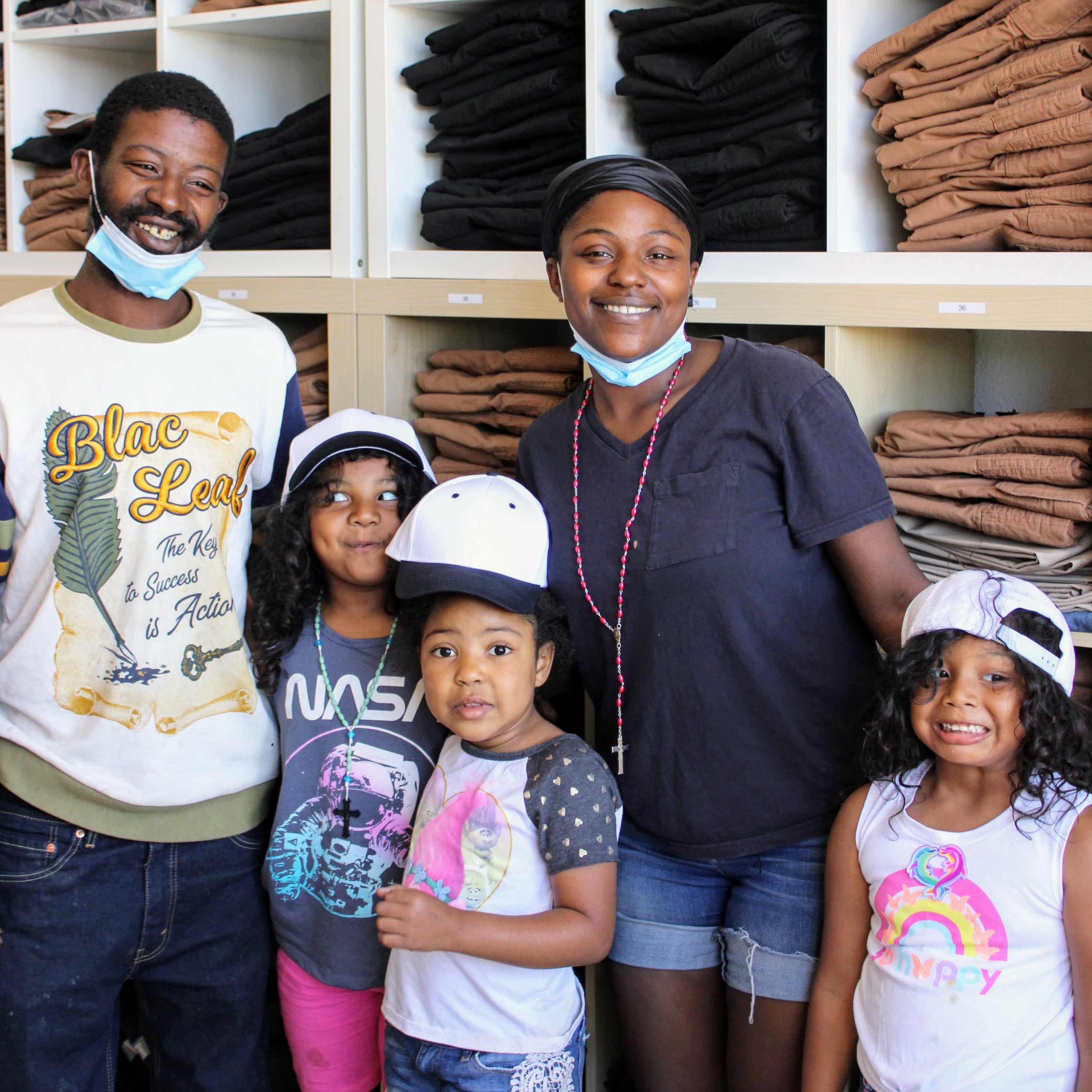 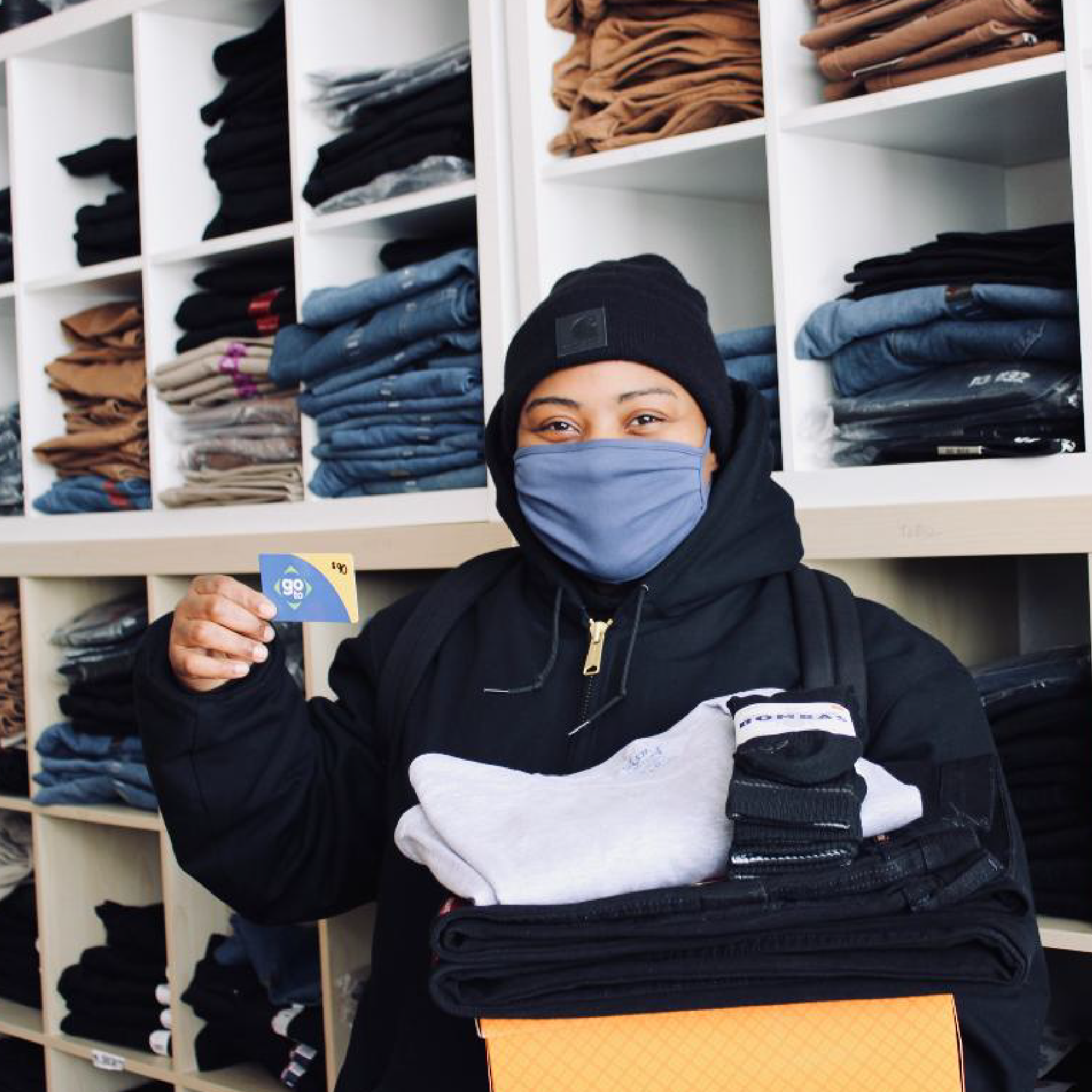 Every year we host fundraising events. You and a plus one are invited to join us.

Restoring Hope Breakfast -Save the Date!

Homelessness is not something we can tackle alone. We need your support.

Your  donation helps get a client to their first and next paycheck, and into stability.

When you attend our events and invite others it helps raise awareness and expand our network.

Your support can be as easy as sharing and following us. 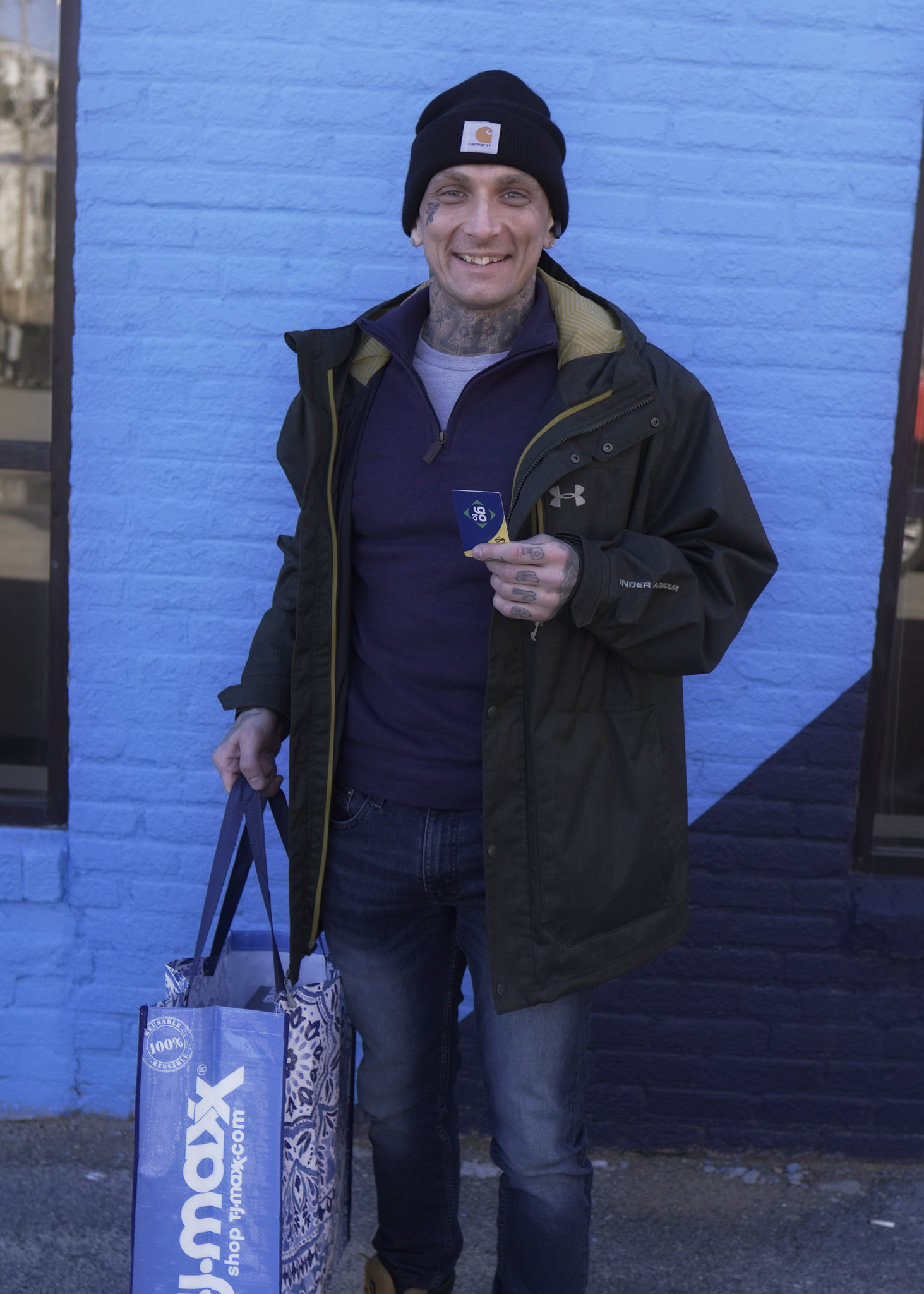 Jesse arrived at Small Sums ready to start something new. Immediately, you could see the excitement and relief he had after a long journey to get to our office. He expressed that not only was it his first time ever riding the train, but this would be his first job EVER!! Jesse had just been released from federal prison two weeks ago and has already landed a job doing maintenance work. He was full of appreciation and was adjusting to the new world after being incarcerated for more than half his life.

While speaking with Jesse, you could see his passion to change and ensure that his future wouldn’t be determined by his past.  With the world feeling so new, Jesse told us, “I gotta do some catching up”.

Jesse’s goals are simple—work, live well,, and go see our beloved Minnesota Vikings play in the new stadium. This may seem easy for some but for Jesse, this is just the beginning. When asked what people should know about him, he stated, “I’m the most outgoing person I know, but right now I’m the most nervous person in Minneapolis”. He described his mindset moving forward as “Exuberant” and “Happy as hell”.

Small Sums is just a small piece of the puzzle when it comes to making sure that Jesse’s second chance starts off on the right foot. We were completely in awe of his resilience and passion and can’t wait to see where he goes. 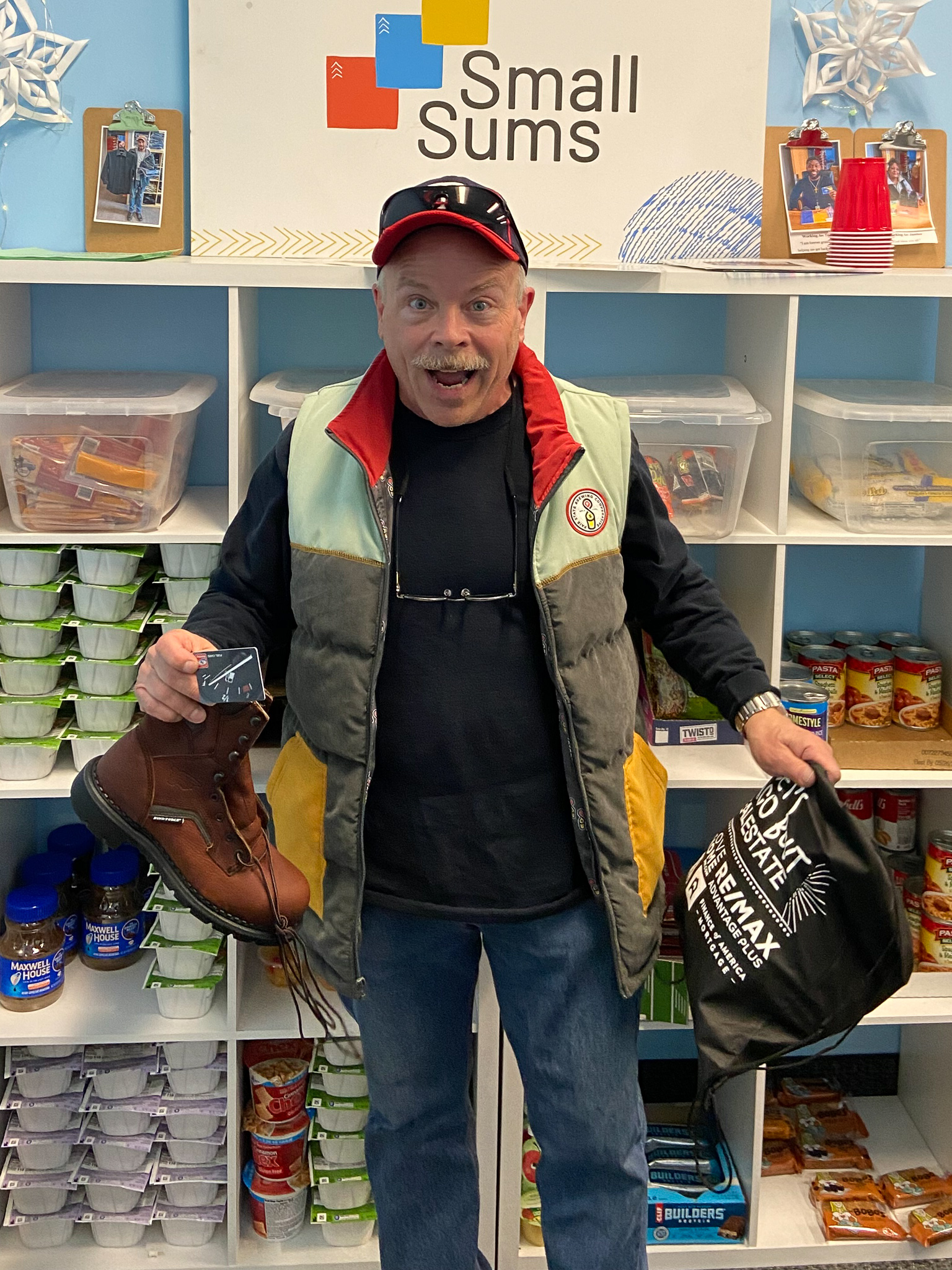 Mark is starting work as a plastic mold tech and is feeling good. He is a little anxious after not working for a while and starting at a big company with lots of expectations. He has minimal experience and is worried about the newer equipment. He was just released from being incarcerated and one of the biggest challenges is getting used to being back. Mark said that what motivates him each day is the "beauty of freedom". There was an aura of gratitude encompassing Mark, as one could clearly see he was fully appreciating each day to its fullest. You could see tears as Mark described his gratitude at small kindnesses like when his sister gave him a car after his release. When asked what he would want people to know about him, Mark said "don't judge me for my past, judge me for who I am today." Additionally, each day Mark says his mindset is one of "perseverance".

We were able to get Mark off to a good start at work by providing him a bus pass, work boots, t-shirts and pants, and some special treats from our food shelf. 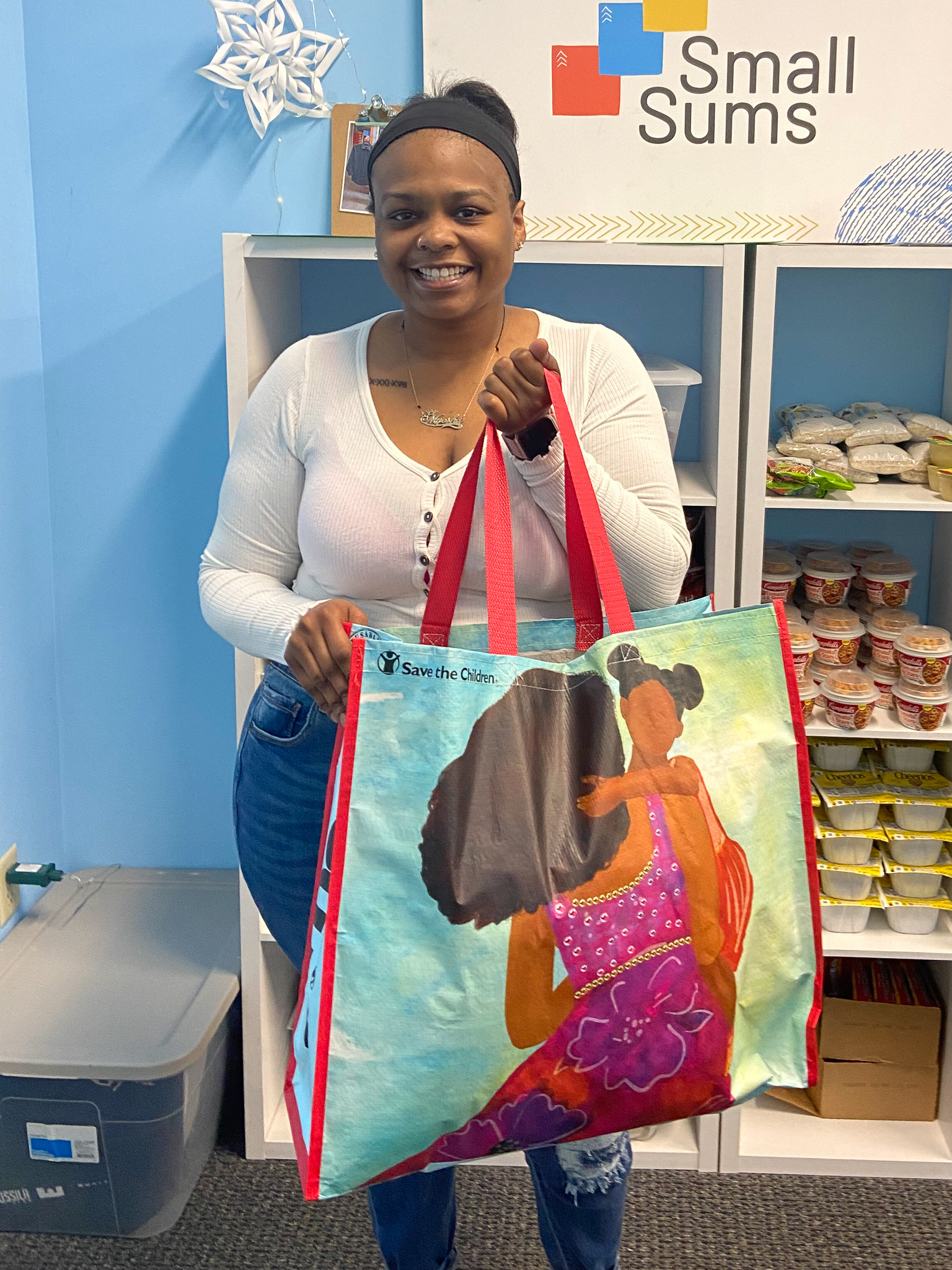 A few weeks ago, Myesha was a single mother, without housing and a job. Myesha knew she needed to find a job to find security for her and her daughter. She was alternating between staying with family and sleeping in her car. Finding a job with this level of insecurity was challenging. Through it all, Myesha is motivated by her one year old daughter. She says her daughter,  “keeps her going when she wants to give up and is her little angel.”

Myesha explained that she was in a car accident about a year ago. The accident led to losing her housing and job due to being placed on bed rest. It was also during this time of incredible upheaval that she found out she was pregnant.

Throughout this tribulation, Myesha kept her goals front of mind- find a job and gain security. Today, Myesha is about to begin her job stocking items at an Aldi’s grocery store! She knew she could rely on Small Sums when told she would need steel-toe boots for unloading heavier items. We were able to give her these required work items.

Today, Myesha described her current mindset as focused. She is ready for a fresh start with firm ground to walk on. We are rooting for your Myesha!